For this edition of Homey Stories we've talked to Andre Gerrmann. Perhaps you've noticed him through our social media channels: Recently he was featured in a TV Programme called 'Cashing with Green', in which he proudly showed off his Homey. With his setup of 44 solar panels, 3 inverters and 1 Homey he managed to bring his monthly €155 energy bill down to just €20! We wanted to know his secret.

Andre lives in Heerhugowaard, a town in the North of the Netherlands, with his wife and two sons. He's made himself quite the smart home over the past few years, and has always been very interested in gadgets. The family lives in a 'green' home. It's so efficient that he has been interviewed on national TV about green energy and savings.

Andre, formerly an avid 'petrolhead', recently changed to an electric car. "What an invention! It's a shame we haven't started developing this earlier." He's had numerous smart products in and around his home over the past few years. Because of his curious nature he wants to try everything at least once. In Homey he found a smart home controller that combines his enthusiasm and turns it into productivity: Everything can become useful. Nowadays, everything that's brought into the house has to be compatible with Homey. 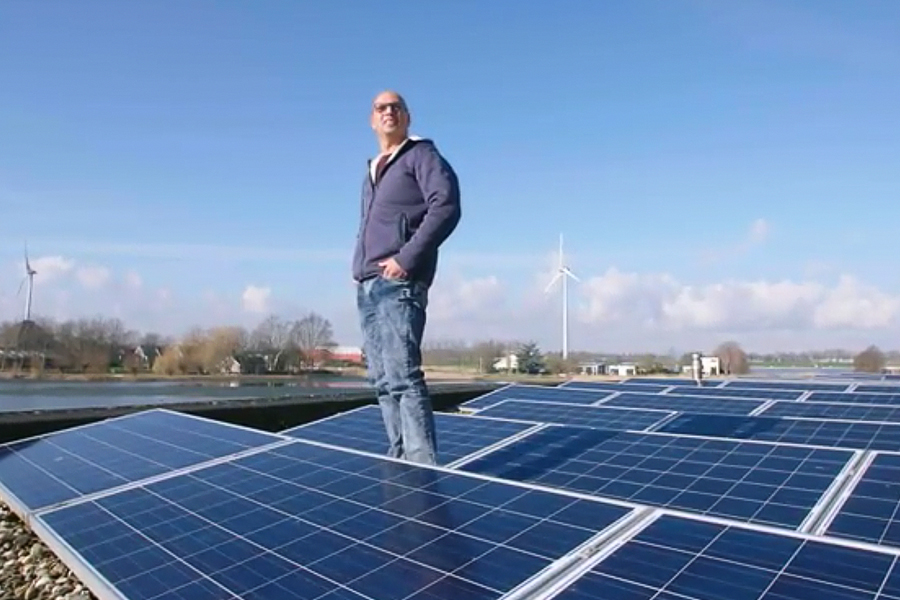 And you really take notice! Everything is smart: Sunblinds, Philips Hue lights, controls for the heater and the airconditioning, Sonos speakers, the air fan, door sensors and a healthy amount of KlikAanKlikUit sockets.

How does this ensure that Andre saves so heavily on his energy bill?

Andre tells us that his Homey is set exactly so that he can see how much energy his three inverters produce. Depending on the energy produced, all sorts of different actions are set in to motion, like turning on the washer, dishwasher or heat boiler. He ties everything together with hardware by Plugwise.

Through the Homey App for Plugwise he found a smart way to see how well his energy supply is functioning. Homey's ring shows how much energy is being used and/or if there's energy being returned to the grid. A red ring means Andre's family is using a lot of energy, a green ring shows there's hardly any energy being used, and a blue ring tells the family that the solar panels are returning energy to the grid. Homey has a prominent spot in the living room, so that Andre exactly knows how green his home is at any given time. 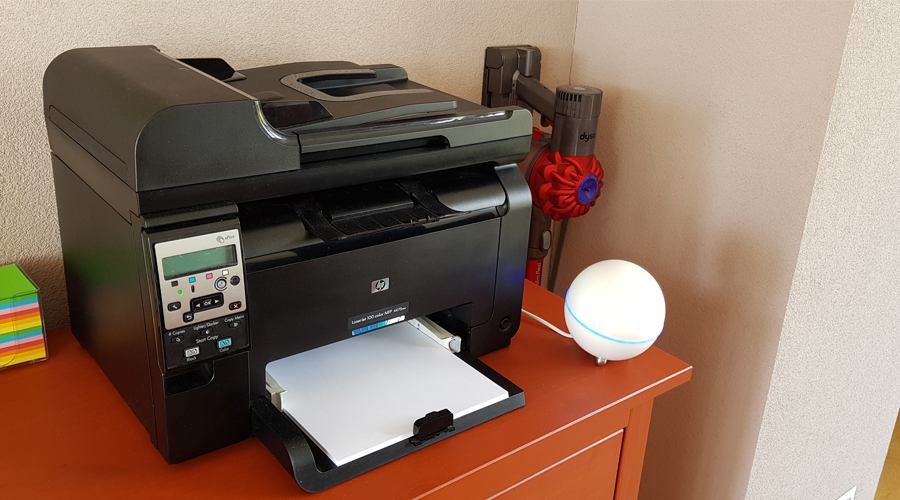 It's extremely comforting to have this much insight into your family's energy usage. The family always knows what amount of energy is going where. However, saving doesn't come easily. And certainly not if you want to save as much as Andre. This is partly due to the presence of 44 solar panels, but also due to the fact that Homey controls a lot of devices with energy preservation in mind.

The biggest savings are due to the fact that the family uses a lot less of gas for heating. As long as the solar panels build up an energy supply, the entire home is being heated through air heat pump, or airconditioning. This is possible so long as it's allowed to net your generated energy: That way you can generate energy during summer and use it in the winter.

Aside from the switch to electrical heating, the family took on another few measures to reduce their energy usage with a little help from Homey:

Doors are often left open. A habit that can cost a lot of energy during wintertime. They've made a Homey Flow that reports a door is left open after 1 minute based on the state of door sensors. This report is being repeated every 5 minutes thereafter, until somebody closes said door. This Flow is only running during the colder months of the year, and involves everybody in closing doors, thus saving energy.

Devices that are season-dependant, such as electric blankets, are automatically turned on and off, so that nobody accidentally leaves them on unnecessarily.

And our personal favourite: The kids have a tendency to take very long showers. That's why Andre used Homey to run the shower through a timer. After 8 minutes of warm water, the boiler is switched off with a smart socket. 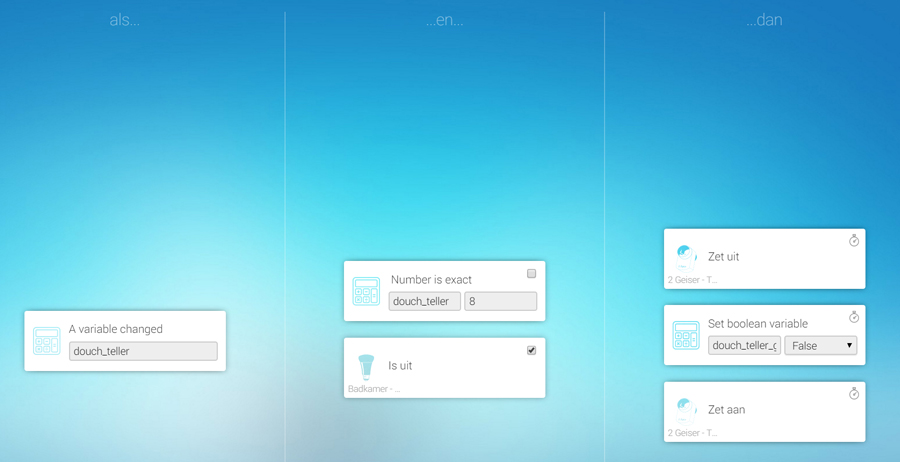 All of this contributes to a drastic decrease of the energy bill. It did cost some time and effort, but the results are impressive.

Andre is very satisfied with how things are going right now. Everything works as it should, and he's reached most of his goals in terms of going green. "However, I notice that tinkering with Homey comes in waves. I'm thinking about automating my curtains."

Want to go green yourself?

When you start researching solar panels you'll notice that there are two important components: The panels and the inverter. Inverters are the devices between the system of solar panels and your energy connection.

Solar panels supply Direct Current (DC). However, the power that’s being pushed to the grid needs to be Alternating Current (230V AC). The inverter makes sure the direct current the panels produce, can be ‘inverted’ to alternating current. That way it can easily be pushed to the power grid, without any problems. 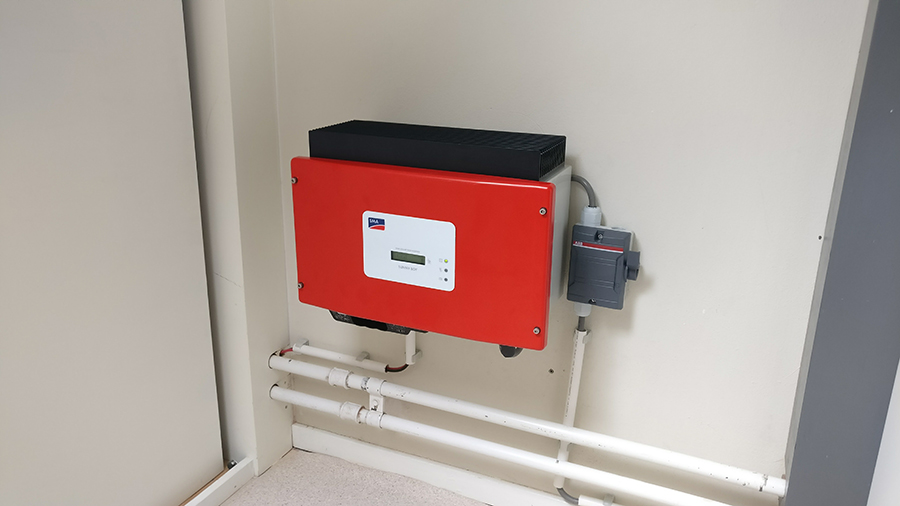 For a consumer, there are many different ways to install solar panels. Essentially, they’re pretty straightforward devices, and very accessible to consumers. Any home-owner, and in some cases even tenants, can place solar panels on their roofs.

When shopping for solar panels it’s important to explore what the possibilities are. To get the most result from your panels, you have to think about where you want to place them. What angle of inclination works best in your situation, and find out the size of the surface you can cover up with panels. The most popular and desired setup is when your rooftop faces south. Logically, that would leave you with the best result. 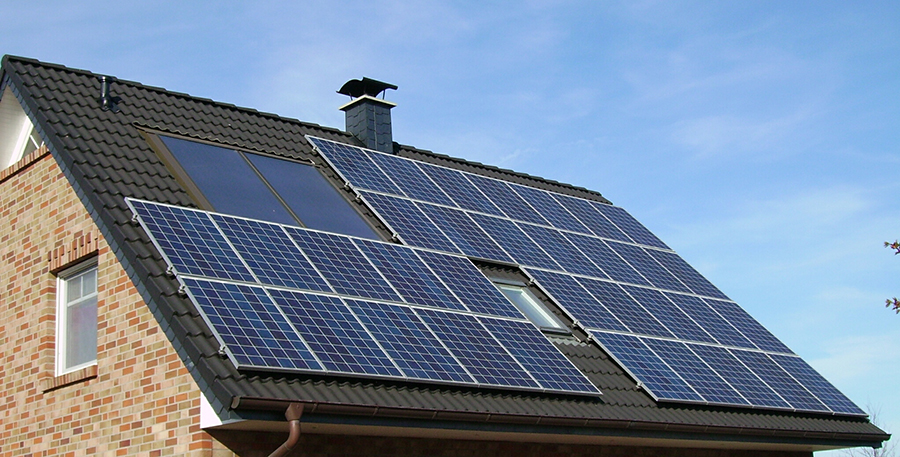