Creating a really smart home can be difficult. One of the most active Homey-users, Erik (better known as Domotica huis), knows this. Lately he has been mastering domotics. "Trial through error", as he describes it himself. He likes to share his knowledge of home automation with others, and we frequently see him commenting through our social channels. Recently he placed a really cool video. We asked him if he would like to write a 'guestblog' about his experiences with domotics. Erik, take it away!

Because everyone nowadays can change the colours of their lights, and people often ask me: "What can you do with Homey? What is its value?" I made a demo that showcases a few of Homey's functionalities in a fun way: The Flow Show.

How does the Flow Show work?

I can start the demo on my smartphone with a virtual button, installed on Homey through the app Virtual Devices. Every Flowcard in the "...then" column has a timer in seconds. As soon as the virtual button is pressed, timers of all Flowcards start running. These timers are important to make sure that not everything happens at once, but that all actions neatly follow up one another.

I don't want too many Flowcards in the third column, to keep everything as clean as possible. Subsequently I resolved this by triggering a new Flow after a certain amount of actions. 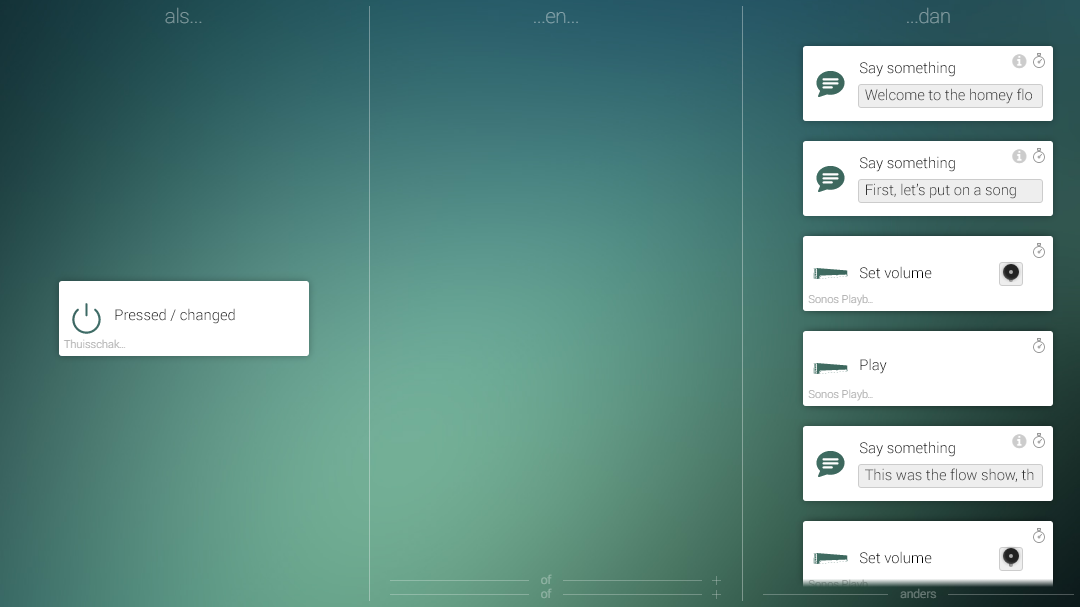 And then the lights go on

This Flow turns on my Philips Hue lights in the living room. Of course it's easier to switch them on all at once, but it's more fun to turn on the lights one at a time. Again, this is easily done by adding timers to my Flowcards. When all the lights are on, we can go on to the next Flow. 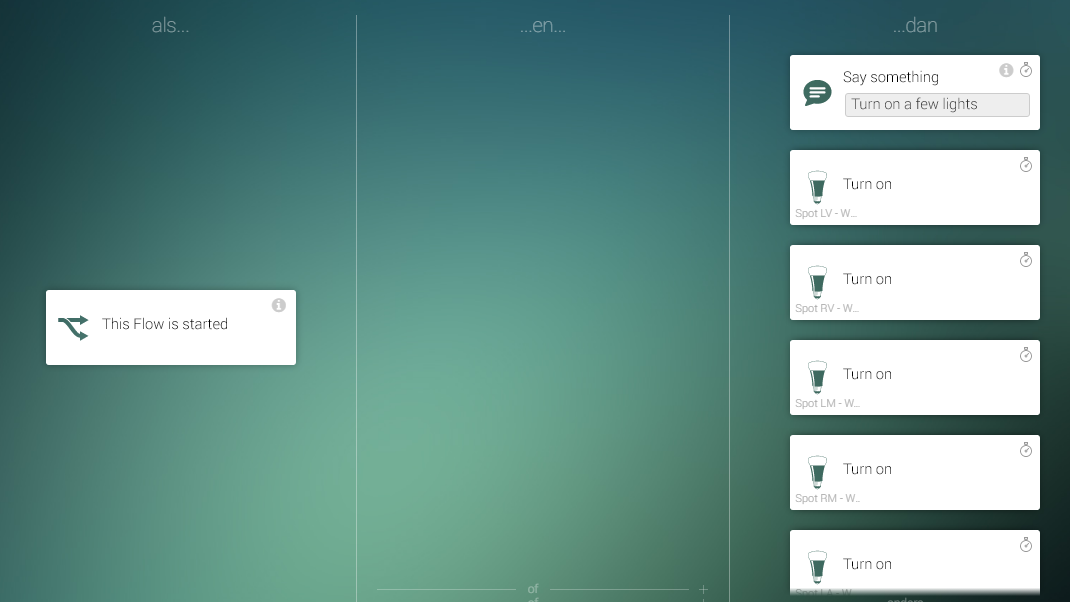 This Flow makes the roller shutters go down, as you can see in the video. Homey announces this with its speech functionality. The roller shutters are controlled by Somfy RTS motors and the corresponding Homey App. Subsequently my blinds stop at my favourite position, about halfway down the window. When the sunblinds reached the desired position, the next Flow is triggered. 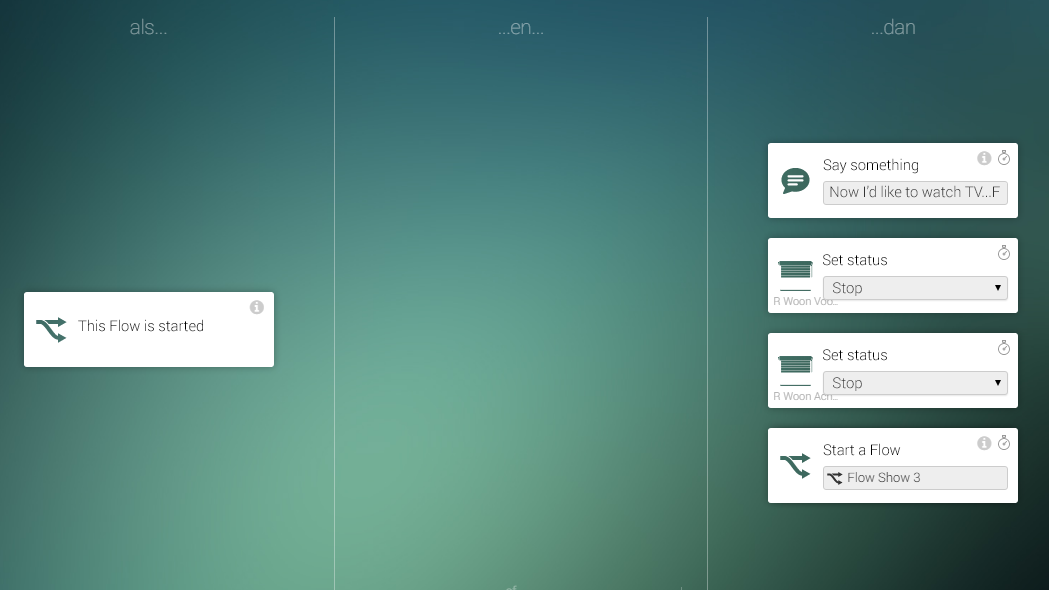 And finally, the television

The television is switched on with the Chromecast App. I picked a certain Youtube video that will play on my smart TV. This command automatically turns on my television set, and my Sonos joins in on the action.

To conclude the Flowshow, the Hue Spot above the TV is turned off and Homey says goodbye. 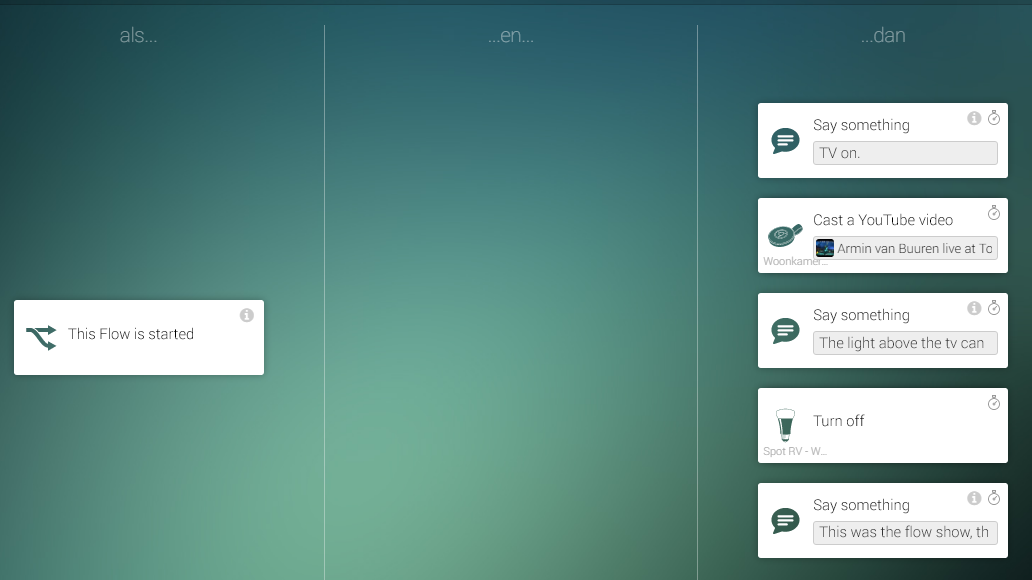 I made these Flows purely for entertainment value, to show how the domotics work in my smart home. You could actually use these Flows to trigger a home cinema scenario, watch a movie and to use the lighting and sunblinds in your home.

I use Homey with the least commands necessary to make my home live with me. To make sure this happens I use a lot of Homey's presence detection functionality, motion sensors, electricity consumption measurements and basic scenarios such as 'at home', 'away' and 'asleep'.