Since Christmas 2017 we have been sold out completely due to a massive demand for people wanting to experience Homey. The sales went through the roof, which none of us saw coming. While it's one of the best feelings to see so many people want to get their hands on Homey, our production forecasts couldn't possibly see this demand coming.

Therefore, we ran into some production issues. The hard thing about hardware is that every part must be in stock, or you cannot assemble the final product. We regularly buy the parts we need from our suppliers, but due to the high demand we suddenly had to buy a lot more. Most delivered in time, but Murphy's Law kicked in and some parts took a lot longer than we needed for fast production.

At the same time, some minor components we used on Homey had to be replaced because they were announced 'end-of-life', meaning they cannot be bought anymore. This happens all the time with hardware, and we have made preparations so new Homeys would be compatible. Homey v1.5.6 included this change.

What happened, however, was that the release of Homey v1.5.6 was delayed multiple times due to new found bugs we didn't see coming. One for example was that the timezone didn't update, and Homeys time was wrong. This was the result of a package update hidden deep in the Linux system we use. A few more of these unforeseen problems happened, which delayed the update more than we hoped for (it was intended as a patch release anyway!).

At some point we ran out of our own stock of these components.Therefore we had to ship new Homeys with the v1.5.6 software, which was still experimental at that point. We decided that v1.5.6 was more stable than v1.5.3 at that time, and we started sending out new Homeys with this software version.

We then found a bug in Homey v1.5.6 where zones couldn't be modified. Ouch! Usually these changes are tested thoroughly but due to the time-sensitive nature, this one slipped through. Lesson learned: it are always the most trivial bugs that happen, because you don't expect them to happen.

We fixed the bug in Homey v1.5.7, which is currently being tested in the experimental channel. If no new problems arise, v1.5.7 will be released to the stable channel for all Homey users.

Our mission has always been to connect everything in your home. We felt that while Homey is the solution to the connectivity problem, giving advice to our users on which accessories to buy was a logical step to take. Now we've taken it one step further, by launching the Talks with Homey Store.

We have replaced the old store, where previously only Homey could be bought. Now we offer a single experience to buy both Homey and accessories. But we didn't want to create a regular webshop, there are plenty of them already. We focus on an easy and fun experience to explore what's out there, and what Homey can do for you.

We are very satisfied with the result, yet are already thinking ahead. In the future we think you should be able to buy a set of products, together with a pack of Flows, created by both us and the community.

Learn more about the Talks with Homey Store in this blog post.

In our mission to make it easier for both users and developers to use Homey, one of the top priorities was the comment & rating section of Homey Apps. Most developers preferred a thread on the Athom Community Forum, instead of comments under their apps. 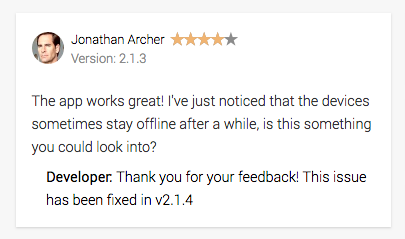 We have therefore replaced the comment section with a review section. This gives both users and developers much better feedback for a Homey App. Developers can leave a comment under a review as well, to notify the reviewer than a certain issue has been fixed, or simply thanking them for their feedback.

The major focus for us in 2018 is quality. We aim to make developing Homey Apps as easy and fun as possible for developers, and it was much needed to give the command-line tool athom-cli an update.

The main feature we've improved upon, next to more intuitive commands and security enhancements, is the validation of Homey Apps. Many bugs happen because previously apps were checked minimally before they could be installed on Homey. We've improved this process, and perform an extensive check of the app-in-development, to help developers create high quality apps.

The new version is available to all developers by running npm install -g athom-cli in the command line.

We have been working on the following apps last month. All of them are still experimental, but should be good to go for testing and daily usage.

Soon we will publish new apps for Naeto Robotics, KNX and more.