We often use our blog to write about all the fun stuff you can do with Homey. Sometimes we even forget that Homey has a very practical side as well. For this Homey Stories we visited a married couple that uses Homey to make living with a handicap more accessible.

To visit Paul and Gerd, we travel all the way down to Flanders, Belgium. Seven years ago, Gerd suffered a severe form of leukaemia. She recovered from it, but paid a heavy price: she would have to live with a transverse lesion. 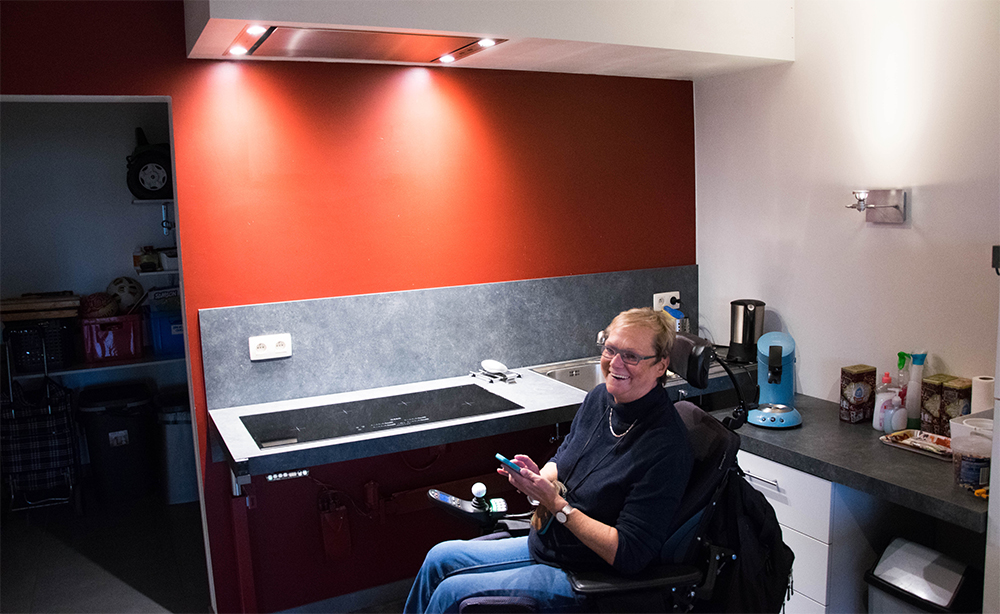 The couple sold their Antwerpen home, and moved in to a ground-floor apartment. Fully organised and adjusted to wheelchair accessibility. Very nifty, this way Gerd could keep on doing things even when Paul isn’t around. However, a few things remained difficult, like controlling the lights, ventilation, doors, curtains and blinds.

Searching for a solution

Paul is a physiotherapist, occupational therapist and nurse. With these three professions as a solid foundation in healthcare, he knew that technology should be able to offer a solution to lighten the impact of Gerd’s handicap on the on the couple’s day to day life.

And then they met Homey

Around two years ago, Paul and Gerd visited a Reva fair in Gent. At this fair they had their first contact with home automation products for people with a handicap. After meeting some of the representatives, a quotation was drawn up. A solution to some of their problems would cost them 14,100 euro. Unaffordable. Aside from the hefty price tag, installers would have to come and visit them for each and every problem along the way. Paul was certain: there has to be something I can build, facilitate and expand myself.

After a long search on the internet for the ideal smart home controller that would fit their situation, Paul saw an article about Homey on the tweakers website. Because Homey supports both Z-Wave devices and Somfy blinds, it was love at first sight. Because of the fact that there are still new Apps being developed for Homey on a day-to-day base, Paul and Gerd were convinced that Homey was the future proof solution they were looking for.

After installation, Paul started off with his first project: a Fibaro single switch for the entire bedroom. He hoped this would have an immediate impact – and it did! It facilitated a lot of independence, because sleeping, rhythms and cleaning became a lot more accessible and a lot easier. Next up was a Fibaro Double Switch that would be used to control the central ventilation with Homey. By doing so, the ventilation could easily switch between running on the ‘standard’ powerlevel and the ‘turbo’ powerlevel. All from a smartphone! 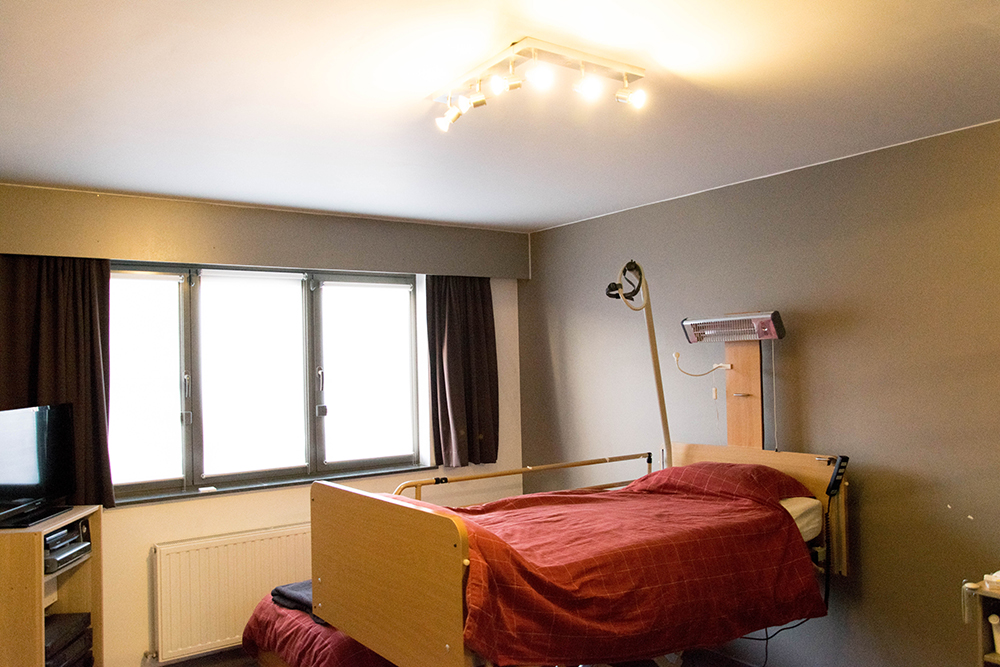 Paul caught a case of the Homey-virus. If the bedroom could be controlled off a smartphone so easily, what other possibilities remained?

Paul started off by connecting all their lighting to Homey. Everything is remotely controllable with the Homey Smartphone App, including the lamps they already had by means of Fibaro wall plugs. The extractor and lights in the kitchen are added to Homey’s system, and the curtains and blinds powered by Somfy are now also controlled with the smartphone App.

Everything Gerd had to be able to stand up for, is now controllable from her smartphone. 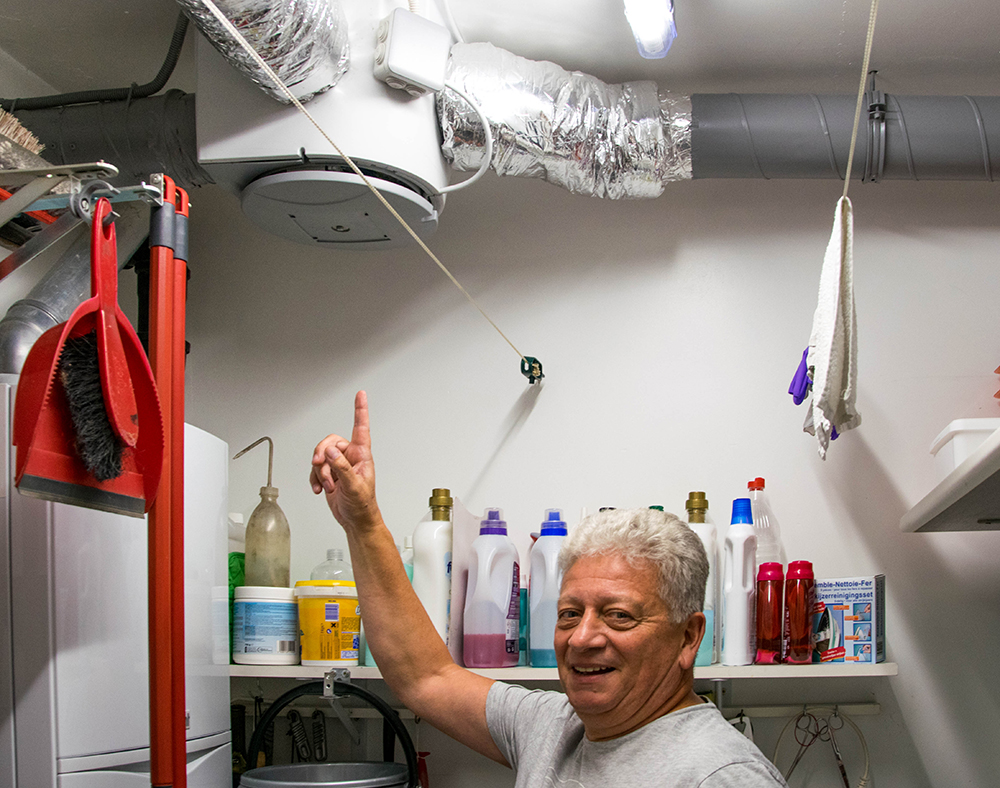 Aside from the added practical value the couple also uses Homey for safety. Several door/window sensors are placed throughout the apartment. If one of these sensors is triggered, Paul immediately gets a notification on his phone. Of course, this isn’t directly related to Gerd’s mobility, but they find it comforting that they know when the home nurse comes by.

Paul also made sure he gets a lot of notifications on his smartphone when something happens. That way he’s always involved with what happens at home. Even when he’s away. 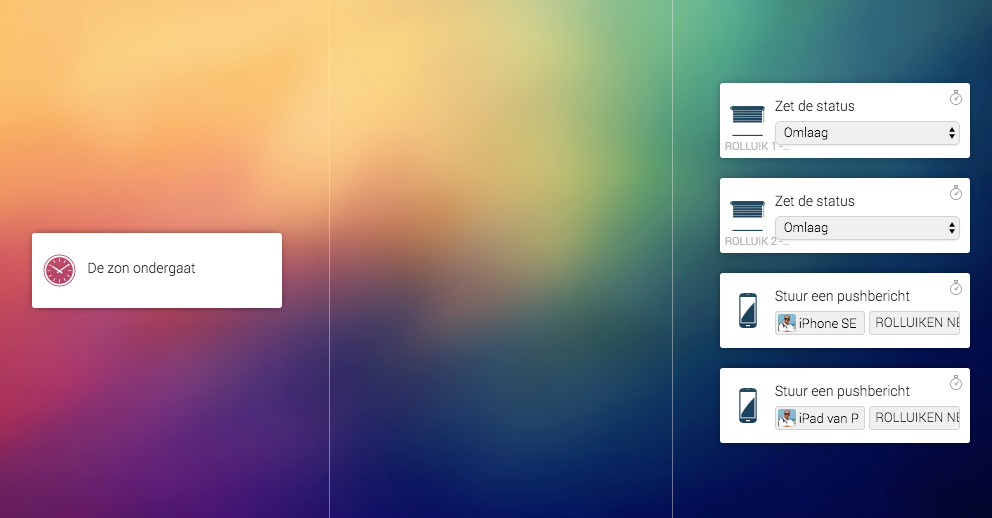 Paul and Gerd’s apartment is very future proof. We don’t set foot in a fully automated environment such as this one very often. The couple spent quite some time and energy to get to this point, but they think the result is totally worth it. They know what they want and what they need in terms of home automation. And they have the needed knowhow of doing it themselves. For the moment, Paul is looking into doing something with music and media, motorised doors and he was thinking about venturing into a garden irrigation project. Of course, everything controlled by Homey.

They left us with the request to make the buttons for the motorised blinds in the Smartphone App just a little bigger. Don’t worry! We notified our developers.