At Athom we have always set the goal to communicate clearly and involve our community in the R&D we do on a daily basis. It is important to us to be transparent as possible, because not only we, but also the Athom Community, is building Homey.

Since we began on Kickstarter we shared the process of creating Homey's hardware and software. After a while we switched to the Athom Community Forum to write software updates. And now it's time to try something new - a monthly series of blog posts where we can share in-depth what we've been up to the month before, and what's coming in the near future. So let's get started!

The next firmware update for Homey will be v1.5.6, featuring many fixes since the last stable, v1.5.3. We have been focusing mostly on Zigbee, Z-Wave, RF and many other fixes. Working on the update has proven more difficult than we anticipated, because various problems arose.

One problem, for example, was that the update became so big (mostly due to various Linux packages), the time to install the update was way above one hour. Some users in the experimental channel therefore thought Homey was broken and pulled the plug. While Homey was updating as plan, pulling the plug during an update will almost always render Homey useless, until it's returned to us for RMA.

We have therefore decided to flash this update as a 'full image', instead of a 'patch'. This has a fixed time of approximately 20 minutes, but introduced a new problem: the Zigbee settings would've been erased by doing so. Luckily for us, we were working on the Backup & Restore functionality at the same time (which will ship in Homey v2.0.0), so we could use parts of that to circumvent this issue.

Another feature we have added is the much-asked for 'Heal' button in the Z-Wave Developer Tools. What this does is ask the node in question to discover it's neighbours and build a new 'phonebook' of it's surroundings. Doing so should improve reliability of that node and it's neighbors.

Homey v1.5.6 took a lot langer than we hoped, but it seems we can ship it to the experimental and stable channels very soon.

The next version, Homey v1.5.7, will feature Homey Music enhancements, and from there we will work towards Homey v2.0.0.

When we experienced the problem where a few Homeys were bricked due to a 'pull-the-plug', as described above, we started thinking about a solution to prevent this happening on a larger scale. Since then we've introduced 'waves' in our update roll-out. 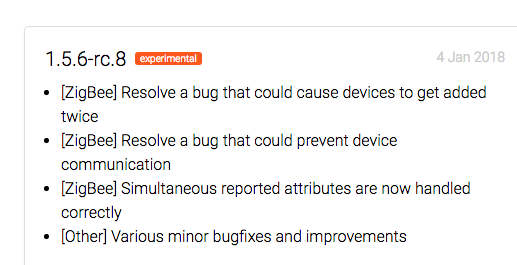 Rolling out in waves simply means that whenever we release a firmware update for Homey to the experimental and stable channels, only a few percent will get the update just after. When everything goes right, a somewhat larger percentage will receive the update, and so on. This is done to improve reliability and prevent a worst-case scenario where we accidentally ship an update which breaks every Homey out there!

As announced earlier, we are shifting focus to a mobile-only experience. While the desktop is still a powerful tool for content creation and development (such as our developer tools), mobile has proven itself as the go-to interface for users. 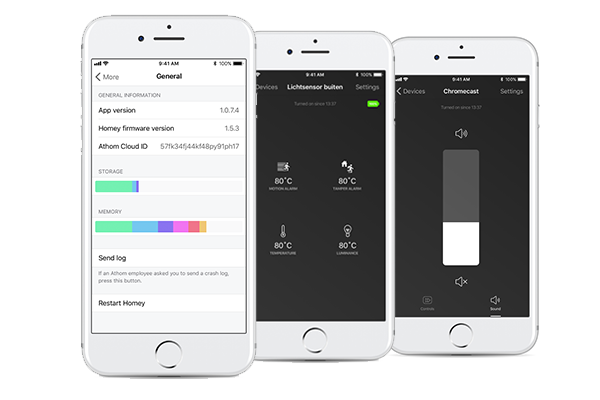 The Homey Smartphone App is currently available under preview in a functional interface. We are working on a much more user-friendly and sexy looking upgrade in the meantime, and implementation is going steady.

The new Homey Smartphone App doesn't only look better, it's actually more useable as well. For example, when you're looking at a device, it's now very easy to navigate from there to all your Flows which include that device. Or the crammed mobile cards we had before, have been replaced by a full-screen experience with an infinite room for buttons, sliders, sensors etc.

Insights will be split in two views: Charts for the numeric data (e.g. energy usage in kWh), and a Timeline for event-related activities (e.g. when someone came home, or your washing machine was turned on).

In the future we will send you a monthly report of your home, with insight into your most-energy consuming devices, the average temperature and much more.

Parallel to the development of both Homey v1.5.6 and the Homey Smartphone App, we have been working on apps as well. The new releases of January are listed below. 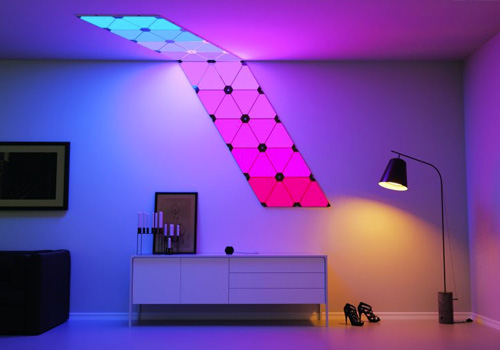 We met our friends of Nanoleaf at CES, and they loved Homey, and we loved their Nanoleaf Aurora panels. A few days after we returned from the venue, a box was waiting for us to integrate. A few hours later, the Nanoleaf Homey App was working and our office looked a lot nicer! Check it out. We've even included a 'rainbow' effect! 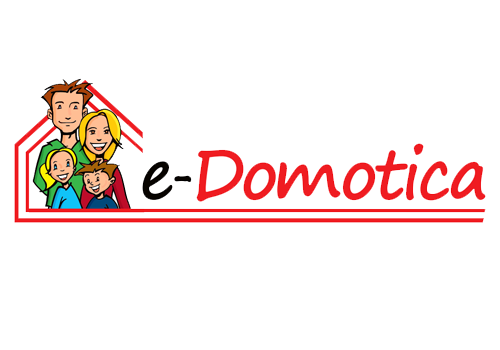 The e-Domotica app has been released with support for the Z-Wave powered e-Domotica Wall Plug. Check it out.

At Athom we have something called 'Hacky Friday' every last Friday of the month. This is a day where everyone can do what they want, as long as it's related to Homey. One of our engineers created a PostNL app, where you can track your parcels and let Homey run a Flow on certain events. Pretty cool! Check it out.

In February we will work on Homey v2.0.0, release a preview of the Homey Smartphone App with the new design, launch an update for Talks with Homey and have a Community Event. Exciting times lie ahead!